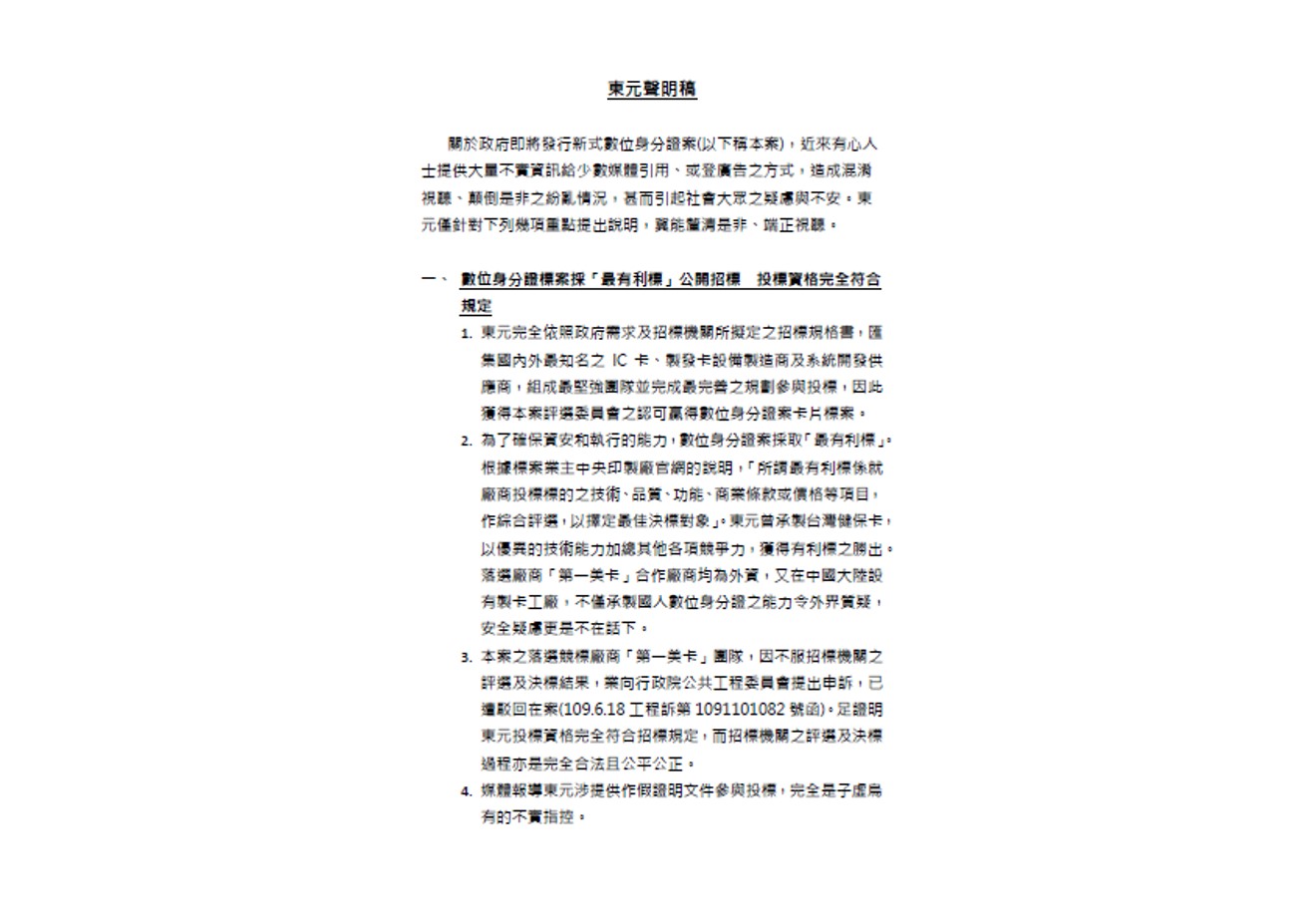 On recent confusion and chaos caused by disinformation on the new digital identification card project spread by someone, either via some media or advertisement, TECO would like to made the following clarifications:

1. TECO fully meets the required qualifications for the open bidding for the digital ID card project, held under the principle of the "most advantageous tender":

(1). According to the specifications for the open bidding, TECO has organized a highly competitive team, consisting of renowned IC card producers, IC card manufacturing equipment manufacturers, and system developers, to take part in the bidding after complete planning, as a result of which the evaluation committee awarded the contract for the project to the TECO team.

(2) Based on the consideration of information security and executive capability, the principle of the "most advantageous tender" for the open bidding is defined by the Central Engraving and Printing Plant, the host of the project, on its website as "under the principle of the most advantageous tender, evaluation of tenders takes into account such factors as technology, quality, function, commerce clause, and price, before selection of the optimal one." Backed by the experience of producing Taiwan's national health insurance card, the TECO team won the contract, thanks to its outstanding technological capability and other edges. By comparison, Beautiful Card Corp., which lost out in the competition, partners with foreign companies and has card manufacturing plant in mainland China, leading to concern not only about its capability but also information security.

(3) The Public Construction Commission, under the Executive Yuan, has rejected the appeal of Beautiful Card Corp. against the outcome of the open bidding (PCC letter No. 1091101082, June 18, 2020), confirming the qualifications of the TECO team and the fairness and justness of the outcome.

(4) Allegation by some media report that TECO provided fake documents in its tender is false and utterly unfounded.

(2) Among foreign partners on the TECO team, Idemia is one of the three largest IC card manufacturers in the world, having issued over 3 billion IC cards, in such countries as the U.S., Holland, Estonia, Morocco, Costa Rica, Latvia, Burkina Faso, and Andorra; Entrust Datacard is the world's largest ID card equipment manufacturer, having engaged in over 450 public ID card projects in 150 countries, including U.S. travel card, Canadian passport, Mongolian ID card, Thai health insurance card, Hong Kong ID card, Korean ID card, Malaysian ID card, South African ID card, and Spanish driving license. Idemia, a French firm, will produce the new ID cards in Czech, while Entrust Datacard, a U.S. company, will manufacture the equipment for the project in the U.S. and the U.K. It is absurd to allege that the two renowned international firms would conspire with China to harm Taiwan's interest.

(3) In the execution of the digital ID card project, all the card issuance equipment and systems will be installed at secured places set up by the Central Engraving and Printing Plan according to international standards, with all the operations to be executed by employees of the plant under the rigorous supervision of the Ministry of the Interior. The card and equipment manufacturers don't have opportunity to access people's personal information, without the possibility of leakage of such information.

(1) TECO undertakes only the hardware part of the project, namely ID PC chip card and printing equipment, excluding system design. The TECO team pledges to meet the information-security requirements of the project host Central Engraving and Printing Plant and not to manufacture the cards in China, on top of pre-shipment test for the cards.

(2)  The collection of interfacing fee by TECO as alleged by some unqualified bidder stems from their misunderstanding of the tender specifications, which has been clarified by Central Engraving and Printing Plant on its website: "The bid winner must unconditionally modify the plant's hardware and software free of charge, so as to complete interfacing work and assure compatibility."

4. Smear campaign should be repudiated

The smear campaign mounted by some company not only wastes social resources but taints the nation's international repute, which should be repudiated. TECO reserves the legal right against such activities.